OK, so it’s not exactly an app. But the first book in the Raymond and Sheila Stories, Are You My Friend? is the ‘appiest’ story I’ve found so far in the iBookstore–and that’s a good thing.

This is a picture book aimed at kids 4-8, and in much the same way as the Franklin turtle series, features animal characters interacting and muddling through common relationship issues. Raymond is the central character, a young alligator whose best friend at the beginning of the book is his teddy bear Snowball. He has an older sister Sheila, who is usually busy doing something with her friend and next-door neighbor Ilana. Ilana has a little brother of her own named Iggy, who is Raymond’s age. The story centers around the apprehension Raymond feels as he tries to make a new friend in Iggy. 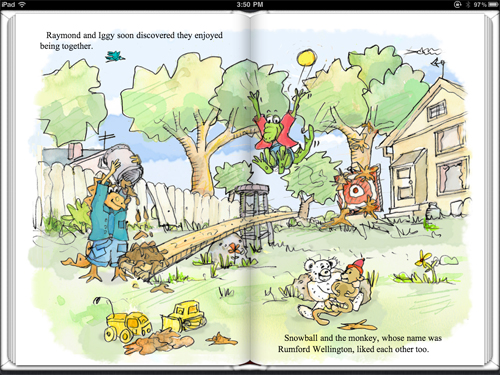 It’s clear the developers behind Are You My Friend? spent a lot of time getting this iBook edition just right. With word highlighting, lively background music, different sound effects on each two-page spread and whimsical artwork, this is a rich multimedia experience that is rare in the iBookstore. I was particularly impressed with the voiceover artist and was surprised to find out all the voices were done by a single person!

The story itself could stand on its own as a print edition–and the multimedia extras don’t detract or annoy. The anti-bullying message is one that parents will appreciate, but the age-appropriate text, colorful art and endearing characters will keep kids interested too.

Bottom line: One of the first iBooks to feature background music, voiceover narration and words highlighted as the text is read, Are You My Friend? is a children’s book that provides a rich, app-like experience and a solid, engaging story as well.

$4.99 in the iTunes iBookstore

(Full disclosure: I received a copy of this iBook for review purposes.)